Facebook has been getting a lot of negative press recently, with a BBC report about fake users as well as this viral post from a company claiming that 80% of the ‘likes’ they acquired through advertising were not from real accounts. Should life science companies be concerned about this matter? Our analysis shows that it may be a issue for company pages which have grown quickly through advertising, with as much as 40% of the ‘likes’ being suspected fakes in our estimation. Here we give best practices for avoiding this problem.

Facebook provides a few ‘back door’ ways of analyzing the likes for almost any page, and we should note that we do not know how accurate these numbers are. The purpose of this post is to encourage life science companies to review their own page statistics and advertising methodology.

We started our analysis by looking at the top cities for the life science Facebook pages with the most likes (a full list of the pages can be found in the likes of the Comprendia Facebook page). The ‘Top City’ for most pages can be seen by clicking on the likes link directly below the ‘thumbs up’ image on the page. We cataloged the top cities for life science company pages (see table below) and we became suspicious as a trend emerged: Mexico, Portugal, and Chile all appeared more than once as containing the ‘major city’ for pages. Do these countries harbor life science hubs larger than the ones we are familiar with, or are they simply home to fake users and bots? STEMCELL Technologies and Promega are the only companies which provided what we considered to be a believable ‘Top City.’

Another ‘back door’ to finding page demographics is to use the Facebook advertising application. To get the data, we began to create an advertisement and went to the next step of targeting users for it. At this step we are able to add the major life science Facebook page names as ‘interests’ and limit the audience to countries in question. These criteria tell us how many people in that country have liked that page, thus showing us how many users we would be targeting with our ad, see the image below for more details. We found that for some reason pages with names longer than two words were not amenable to this method.

We discovered that some of the life science pages with the most likes appear to have very distorted demographics, with less than 10% of likes from the US (see Table) and comparable or higher percentages for other, sometimes much smaller, countries. A general rule of thumb for US-based life science companies is that 50% of the business comes from the US, and 50% from the rest of the world. Obviously, since the US is an important market, life science companies should target a much higher percentage of Facebook likes than 10%. It should be noted, however, that the US only represents 20% of Facebook’s user base, and percentages in this range seem reasonable, but not optimal.

Based on these two sets of data, we singled out the Invitrogen Facebook page and looked in detail at the country demographics using the Facebook advertising application as described above. We found that 54% of Invitrogen likes come from India, Mexico, Indonesia, and Portugal, while these countries make up only about 15% of Facebook users. Where does this ‘extra’ percentage of users from these countries come from—misplaced ad targeting or fake users? The fact that the same countries are reproducibly overrepresented in the Facebook likes points to the latter. Based on these numbers, and keeping in mind that we’re making a rough estimation, it is possible that 40% of the Invitrogen likes are from fake users. We welcome other information that could help explain the discrepancies and further analyses of these data. An open discussion regarding how life science companies can better find and engage researchers using Facebook would benefit all involved. 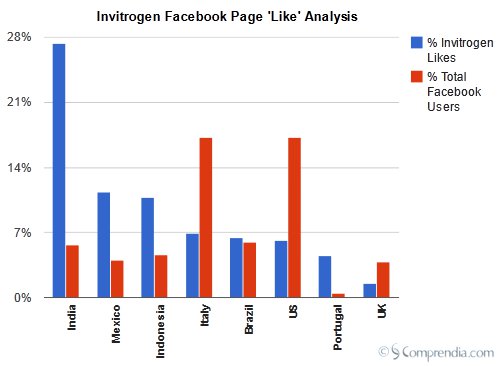 These fake users could be considered a plus, because they are more prone to like posts, making them more visible and encouraging others to like the pages because they appear popular. However, they can add spam comments and skew engagement metrics, and this feedback is one of the biggest benefits of having a Facebook page.

We still believe that life science Facebook pages can benefit from paid or organic advertising, and suggest these best practices to avoid attracting or to eliminate fake users:

We should close by saying that we don’t mean to ‘pick on’ Life Technologies, it’s just that they’re pushing the social media envelope and with this comes risk. Additionally, we have seen phenomenal engagement on many of their pages, including the ones with purported fake users. Indeed, it is their success with pages such as the Molecular Probes Handbook Club, for which unfortunately we could not find demographics data, which encourages us about the future of Facebook marketing for life science.

5 thoughts on “Are 40% Of Life Science Company Facebook Page ‘Likes’ From Fake Users?”