In anticipation of our science communication event this month, we’ve been thinking about the topic which is discussed using the #SciComm hashtag on Twitter. We started looking at more than 5000 Twitter status updates tagged with #SciComm from the last nine months and found that the group is scientifically diverse but singular in their passion to improve the way information is exchanged. Because #SciComm is not a high volume hashtag, commercial tools to find users aren’t sufficient, so we looked to our own data and some publicly available tools. We created an interactive map of 1000+ Twitterers using the #SciComm hashtag and present the some of the data here.

We used the Google Maps API and Yahoo Pipes to create what’s called a KML (Keyhole Markup Language, a type of XML) file from the biographies of every Twitterer who has used the #SciComm hashtag since last June, and this was used to generate the interactive map. We’ve tried in the past to follow Twitterer locations using the geotags on the status updates, but only a small percentage of people use them, so they were not efficacious. The data needed to be manipulated a bit more to provide detailed and uniformly formatted place names, as Twitter’s field for ‘location’ is simply a text input. For an example, see Danielle Lee’s profile, her location could not be resolved presumably because she added ‘midwest’ between city and state and she was misplaced in Ohio.

We were able to automatically determine a location for 1066 of the 1335 science communicators, or about 80%. If you’d like to help improve these types of analyses, update your location in your Twitter profile. Additionally, if many Twitterers exist in one location, they are represented by one pin and you’ll need to use the popup window to scroll through the results, see the image below for more details. Also, if you’re trying to look up a Twitterer, look at the map on Google and use the alphabetized list on the left. Unfortunately, Google Maps has a limit of 1000 place marks, so it is missing about 60 Twitterers, but you can download the KML file and read it into Google Earth if you’d like. 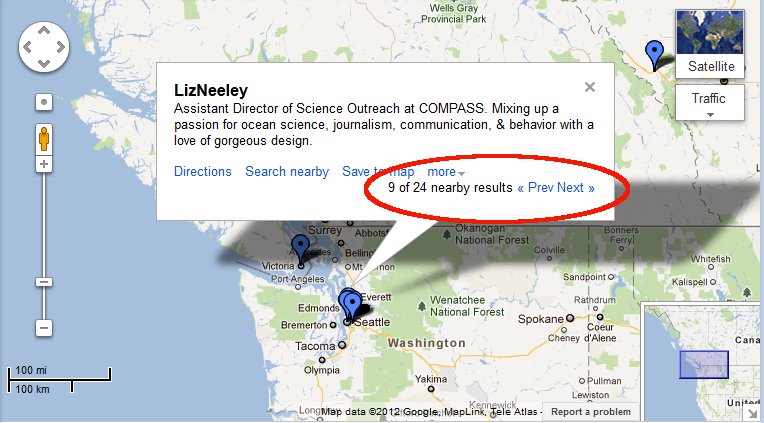 Part of the reason we created this map is because we’ve had a feeling for a long while that Southern California, while it is a mecca for biotech, is behind other regions when it comes to scientists using social media to communicate. While the list of Twitterers using the #SciComm hashtag is not a complete list of science communicators, it certainly represents those who care deeply about it, and use new media to support it. We found a few new Twitterers in San Diego, but as we suspected, we’re well behind west coast cities such as Seattle, where there are 24 people who use the #SciComm hashtag. We did a brief analysis to find the top countries and the top US States, see the results in Table 1.

*States which are not in the top 10 of US in terms of population.

^Not a state but recognized by Google Maps.

We would have liked to do a more thorough analysis, but our initial tools need some polishing to give more accurate results (note: if you’re a coder and would like to help, contact us). For the top countries, it is not surprising that the top 5 are all English speaking, as that is the language of the hashtag. By looking at the map, you can see that the UK and Ireland are a mecca of science communication considering such a smaller population than the US and Canada, and Australia does well also.

For the US states, we also considered population, and marked the states/regions which are not in the top 10 in the US according to population, and this indicates the states or regions with the highest ‘concentration:’ Washington, District of Columbia (Washington, DC), Massachussetts and Maryland.

Hand waving aside, our ‘human analysis’ of the map seems to indicate that the US east coast and UK/Ireland are more rife with science communicators than the US west coast. Yes, California is #2, but we are a big state with 2 biotech clusters, to me the map and the data does not show the dominance we should have. What causes these geographic differences? ‘Instigators’ such as Bora Zivkovic and Lou Woodley and the ScienceOnline events in North Carolina, London, and New York City that they organize certainly have made a difference in these regions. However, the west coast has Liz Neeley in Seattle, events and proponents in San Francisco, SciFund and the San Diego Biotechnology Network. Am I being too critical of the west coast?

How should you use this map? Find science communicators in your region and connect! Meet informally or formally. We found a few new Twitterers in San Diego and I’m also traveling to Minneapolis soon to give a talk and have identified a few. Also, let us know which other hashtags for which you’d like a map, it’s all about connecting! We hope that this map, while it may point out the ‘deficiencies’ in our region, will stimulate discussions and more interest, our event will be a good opportunity. Also, if you’d like to try to do some more analyses of the data, feel free–the KML file can be loaded into excel.

To share this post easily, cut and paste: Where Are The Science Communicators? Interactive Map of 1000+ #SciComm Twitterers http://bit.ly/scicomm_map

2 thoughts on “Where Are The Science Communicators? Interactive Map of 1000+ #SciComm Twitterers”