Hashtags are text strings prefixed with a ‘#’ character which are used mostly on Twitter to tag status updates as belonging to an event or discussion. Life scientist Twitter usage varies widely between disciplines, and we can understand why and glean useful information about trends and influencers by analyzing Twitter conversations using the hashtags as a search query. For this post we’ll use the associated Life Science Hashtags Google spreadsheet and our social media monitoring tools to describe and document the different types of life science hashtags. Our goal is to help the community better communicate through increased understanding and standardization of life science hashtags.

Conferences are the most straightforward utilization of hashtags, the organizers are (normally) the arbiters of the correct identifier for tweets (Twitter status updates) from the event. The conference hashtag is normally listed on the conference website, or you can look for them being used in the designated Twitter account (listed on the Google doc, and for a shortcut follow our life science conference Twitter list). You can see on the spreadsheet we’ve done analyses of the tweets that came from some of the recent conferences, the number of updates varies from hundreds to thousands for each event. Using our social media monitoring tools, we calculated the percentage of attendees tweeting and the results can be seen in the chart below. 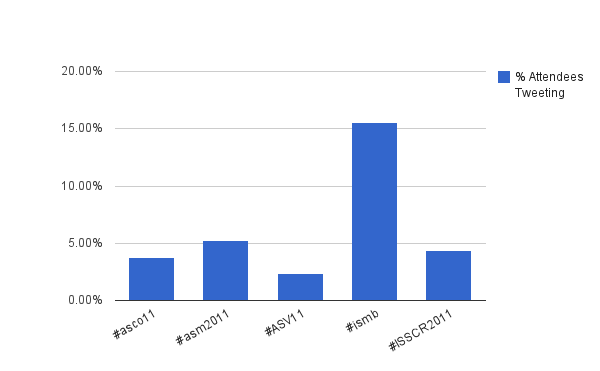 You can see that the percentage is between 2-16%, and that as expected, the computer savvy life scientists at ISMB (annual meeting of the International Society for Computational Biology) have the highest percentage. We intended to include the numbers for the Science Foo Camp (#scifoo) held recently in San Francisco, but they were such outliers that they would have dwarfed the others, with “405%” of the attendees tweeting. Clearly this is indicative of both the tech savviness and influence of the #scifoo attendees and fans, and it also points out that those who don’t attend conferences often also tweet about it. Unfortunately few tweets are geotagged, so it is difficult for us to ascertain who is actually in attendance at the conference, and the numbers are just meant as a guide.

Life science companies should note that different groups of researchers will have different propensities for certain social media applications. So the statement that scientists don’t use Twitter isn’t entirely true, and we find that many life scientists are in ‘listening mode,’ watching conversations held there. Additionally, the life scientists that are tweeting are becoming strong influencers for many reasons, including the fact that Twitter affects search engine results. Moreover, life scientists who engage in social media indicate that Twitter is the best place to get scientific information. We looked at a few more metrics for the conferences we analyzed, you can see them in the spreadsheet, and feel free to help by adding more data.

Participation in conference tweeting can also be affected by the way that the organizers are ‘friendly’ towards social media, we’ve encouraged them to create an environment amenable to interaction. Do they publish the hashtag clearly on their website? There was confusion at #isscr as to which hashtag to use, which makes both tweeting and tracking difficult, an ‘activation energy barrier’ to participation, if you will. ASM is very involved in social media and helped to encourage attendees to tweet, perhaps causing the percentage of Twitterers there to be higher than with the ASV meeting (microbiologists=virologists, right?).

Life scientists also use hashtags to organize topics and to inspire each other. For example, #madwriting was started by @nparmalee to encourage time for researchers to leave the bench and computer and concentrate on writing, presumably publications and theses. This hashtag is used about 350 times a month and helps scientists to unite over a common task. #scicomm and #scienceblogging document tweets about science communication and blogging, respectively, and were started by science online superstar @BoraZ. The hashtag #greenfieldism was started by @carlzimmer in response to a statement made by Susan Greenfield that use of the the internet leads to autism. This ‘meme,’ or a theme copied and disseminated broadly on the internet, resulted in 1400 tweets, as scientists joked about ridiculous causes for everything from earthquakes to global warming. We see that scientists have a great sense of humor as they interact on Twitter, and have started hashtags such as #drunksci in which they talk about doing science inebriated (hopefully joking, of course that isn’t safe!).

In general, hashtags are also used for chats on Twitter, in which the leader usually designates a set time (normally weekly) for whoever wants to join an active conversation on a topic. We don’t see this as much with the life scientists, and believe a big opportunity exists for further engagement by choosing hashtags to discuss topics important to researchers. Currently we see many life science companies in ‘broadcast’ mode (see our Twitter list), they tend to sprinkle hashtags into their updates to get more exposure, but no concerted effort has been made to standardize them and use them to engage researchers. For example, what is the standard hashtag for stem cells, #stemcell or #stemcells? Which should be chosen to avoid ‘contamination’ with unrelated tweets? The very general hashtags #lifescience and #biotech are used about 800 and 3000 times per month, respectively, with the latter containing more ‘noise’ from non-life scientists (e.g., investors, GMO opponents, etc.).

We will continue to collect and analyze life science tweets and other social media data so we can provide guidance, and we invite you to add terms in the ‘topic’ or ‘chat’ category to the Life Science Hashtags spreadsheet. Starting a chat is a fantastic way to get engagement, why not start one so you can become a channel of information? You’ll also glean information once standardized hashtags are in place, as can be seen with our Social Media Compass? report on the ASM 2011 conference which was created using the #asm2011 hashtag. We are actively monitoring tweets from all items in the Life Science Hashtags document, feel free to reach out to us with terms you’d like us to track or to discuss a Social Media Compass report. Another great way to get started is to follow relevant hashtags (use a search column) in a Twitter application such as Hootsuite or Tweetdeck, and use them in updates where appropriate to get more exposure.

Special thanks to Angela Alexander (@thecancergeek) and Jonathan Gross of BioData for lots of help in generating and maintaining the Life Science Hashtags document.