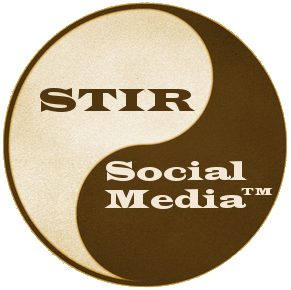 A few months ago we did an analysis of life scientists’ utilization of social media applications, studied the applications ourselves, and published our findings. Based on this study, and our own experience, we’ve developed the STIR Social Media™ system which helps life science companies develop strategies and tactics which will both attract life scientists and maximize their return on investment (ROI). STIR is an acronym for the four attributes which social media applications and campaigns must achieve to succeed: Sticky, Transparent, Intuitive, and Resonating.

In our workshops and on this blog, we’ve pointed out that life science companies have been utilizing strategies and tactics that are similar to those behind social media for decades. Social media is about ‘paying it forward’ and providing resources which go beyond self-promotion, see this blog post for some examples of life science companies who have been doing this for years. Social media involves taking these resources to the next level, and using all the web 2.0 tools available to engage scientists in a two-way conversation rather than broadcasting messages to them. This can be tricky, and based on our studies and experience, we’ve developed the STIR Social Media system to help, its four attributes are described below.

Sticky. Create a site or application which has almost immediate attraction for scientists, providing reasons for them to visit, interact, and return. We’ve all heard about, then visited sites which we never return to again because they’re not sticky. My favorite example of a sticky website for life scientists is BiomedExperts. When you create an account and login, the application allows you to upload your publications, and you’re instantly connected to everyone you’ve ever published with. As such, they’ve circumvented the negative impact of the network effect that plagues many young social networking sites, a brilliant move by the developers of this application.

Transparent. Scientists are skeptical of anything that has the slightest hint of marketing or advertising in it. They love your products, and have lots of brand loyalty, but hate to be be marketed to. An example I like to use is UC Davis Professor Jonathan Eisen’s response to what he calls ‘Stimulus Spam‘ which refers to emails sent by companies eager to help (and profit from) researchers applying for ARRA/stimulus funding. Now, I do think some of the resources that companies provided were useful to scientists, but you can see that they were viewed otherwise by some in the community. As such, social media programs must be handled with complete transparency, as you can imagine campaigns in which the identity of the sponsoring company is not immediately known is a recipe for disaster. I have no examples of life science companies who’ve made this mistake, but read about the 3M social media debacle to help understand why it is so important. Being 100% transparent also means that ties to your products will be much more easily made. A good example in the life sciences is the Accelrys blog, which is completely transparent in its intentions and has great links to their products.

Intuitive. During our study of social media applications for life scientists, we were curious as to why BiomedExperts had so many more users than Scilink, when in essence they have the same premise, in other words connecting scientists via their publications. We surmised that part of it may be that the BiomedExperts interface is much more easy to navigate, or intuitive. Scilink appears to be gone now, so comparisons can no longer be made. This intuitiveness quality speaks to the way we have all been accustomed to the increased functionality of websites. We gravitate towards what is easy, gives us what we want, and what we understand quickly. Related to these expectations, intuitiveness also means that users need to know what’s expected of them in a given interface. For example, users come to LinkedIn to network and find business, and Facebook to share information and socialize, so any activities you plan for either application should match with these expectations. The Invitrogen Everydaycloning Facebook page is a good example of an intuitive application, as the content is useful, light, and social, and encourages fans to engage.

Resonating. Develop a theme that resonates with life scientists; one they can relate to and participate easily in. There are myriad places for scientists to spend time online, and your website or application must resonate with them in order for them to remember it and return. Sigma’s Wherebiobegins campaign is a good example of a resonating theme. They’ve asked scientists “where did your BIO begin?”, and have gotten great engagement on Facebook and other applications from them in the form of videos and comments.

The four STIR Social Media system attributes work together to define social media campaigns and applications that both attract scientists and achieve a favorable ROI. I’m not brave enough to call out those that don’t meet all four requirements, but you can check out our list of life science companies using social media and judge for yourself.

Want to learn how to become a STIR Social Media expert so that you can develop winning campaigns for your company? Attend our ‘on demand’ Social Media for Life Science and Biotechnology Workshop 1 webinar, a three hour workshop which will explain these concepts in more detail, and give you worksheets which will help you to jump start social media at your company. Additionally, we’re offering a series of workshops, with the second being held in San Diego June 22nd. We’ll be offering it as an interactive webinar and on demand as well soon. Sign up for email updates so you’ll always be on top of the developments.