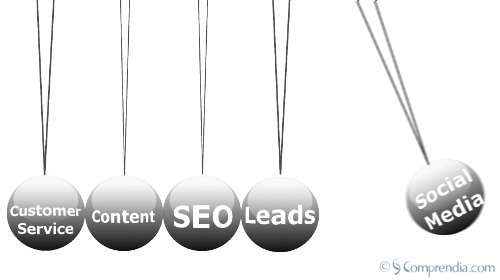 We see a lot of conflicting information about the usefulness of social media, both in general and for the life sciences. Some major companies are reporting on its apparent uselessness and there is a lot of angst regarding the business models of popular applications such as Facebook. However, at Comprendia we see that many more companies are having ‘aha’ moments about social and digital media and they’re diving into it. Similar to life science technologies, its popularity is like a pendulum, swinging back and forth between favor and disfavor, eventually finding its place. Here are three tenets which will help you understand how to leverage the changes life science social and digital media bring even though the final outcome is not clear.

One of the most interesting developments in this story is that two groups we’ve been trying to bring together using social media, life science marketers and science online enthusiasts, are now both interested in holding regular meetings in California. We hope in 2013 to bring these groups together so that companies can find a role in supporting the great science happening on blogs and networks. We are beginning the process by presenting at ScienceOnline in January, stay tuned for updates!

To share this post cut and paste: Is Life Science Social Media Worth It Yet? Three Tenets Behind Its Relevance To Your Business http://bit.ly/RbhpVB