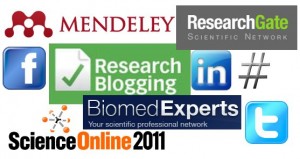 A recent article from the Huffington Post states that social networks for scientists won’t work because there is no incentive from a career perspective. The piece focuses on ResearchGate and takes a stab at the Economist’s article about the community. Here at Comprendia, we’ve never advocated that Facebook should be recreated for scientists, as there are 700,000+ life science graduates in the US already using the application,* and they are likely already connected there to lab mates and colleagues. Rather, we should broaden our idea of the ‘social network’ to include any online community of scientists, not just those which are similar to Facebook. The value of social networks for scientists lies in faster access to information relevant to their research and the communities that are made more available by new tools. Here are 6 successful examples which can be used to understand scientific social communities.

The scientist that is described in the Huffington Post article is preoccupied only with the end result of publications, not improving the path towards them. When I was a bench scientist in the 90’s, my limited access to information and colleagues was imposed upon me by the era. I can see that I would have grown into my current career choice much more quickly if given greater access to them. At conferences and networking events today, we are seeing a transition, albeit slowly, to a new breed of scientists who understand the importance of scientific networks. We need to adjust our definition of scientific social networks to understand the next steps towards helping scientists use them to thrive.

What areas do you think the organizations named, or communities themselves should focus on to take scientific social networks to the next level?

To share this post easily cut and paste: What Is A Scientific Social Network? 6 Thriving and Inspiring Examples http://bit.ly/yNMcLY

4 thoughts on “What Is A Scientific Social Network? 6 Thriving and Inspiring Examples”