A few things have happened over the past weeks that have caused me to reflect on how I ‘ended up’ where I am, in an Outliers sort of way. Also, there are some young scientists who have asked me how I made the transition into marketing, so I thought it might be good to write a post on it. In short, while my current occupation is no accident, I was incredibly fortunate to have mentors and ‘generous strangers’ along the way who guided me to where I am now, and I am very thankful to them.

By sheer dumb luck, I did my first lab rotation at Duke University with Jane Richardson, who was the first to visualize protein structures using so-called ribbon diagrams. She drew the diagrams by hand and they became the standard to help us understand protein structures. The project Dr. Richardson gave me was interesting, as was hanging out in her and her husband David’s lab, complete with comfy couches and crazy protein artwork. I learned about the internet there (1990), using FTP on their VAX to download structures from the protein data bank, and even took pictures of protein structures for a textbook on their Evans & Sutherland computers. In my spare time, I started the department happy hour and sand volleyball league, which last time I checked is still going strong (this will be important later). 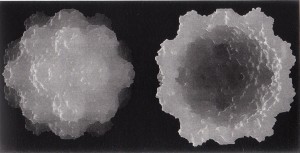 In 1994, my Ph.D. work (and desire to move out West) led me to Alex McPherson’s lab at the University of California, he literally ‘wrote the book‘ on crystallizing proteins, and he was a great mentor. Here, I had the great fortune to work out the molecular structure of a plant virus. It wasn’t the sexiest project around, but the structure (to me) was spectacularly beautiful–even the crystals were stunning (luck again) and images of them became part of the marketing materials for crystallography supply company Hampton Research (started by a great entrepreneur Bob Cudney who inspired me). I began to play with great, open source visualization software such as Grasp to communicate the structure.

This love affair with virus structures continued into my postdoc at the Scripps Research Institute, where again I worked on a non-sexy but fascinating and visually interesting virus project. A great colleague, John Tate, and I played around with the then new Linux operating system and great, open source (or inexpensive) software (for a real blast from the past check out the article we wrote). We came up with some great visualizations and animations for showing virus conformational changes (if I could get the animations off of VHS easily, I’d post them…). The visualization at the top was made using Grasp and was on the cover of the Journal of Molecular Biology.

In addition, around this time (1998) I became interested in web design and designed our lab’s website, and learned about creating and manipulating images using a free program called Gimp (which I still use daily). Bench work, and using these tools to communicate my discoveries, were truly a lot of fun for me and I probably stayed in academia a bit too long, but learning the visualization and communication skills helped me in the long run.

After my postdoc I worked at a ‘genomics boom’ startup called GeneFormatics, where I started to learn more about the world of biotech and facets of the industry outside of R&D. In 2002 I joined Invitrogen, and fell in love with marketing. Here, I was lucky enough to lead an early ‘web 2.0’ project called OligoPerfect, which designs custom oligonucleotide primers and is cited in at least 55 peer-reviewed publications. I still remember asking my excellent boss (and still good friend Michael Gonzales) about the basics of marketing, and his support and guidance.

After this, I worked at EMD Chemicals where, among other things, I helped to improve customers’ understanding of signal transduction through interactive signaling pathway maps and other resources. I made animations of protein kinases bound with inhibitors to help customers understand them. I had a great boss and mentor who I’m still good friends with, Karin Hughes. Later, while working at a small company, I took the lead in organizing a drug discovery conference, and realized the power of bringing scientists together to communicate. In my free time, I learned blogging and the power of WordPress, more great open source software.

If you know me, or have poked around this website, hopefully you’ll see how I’ve arrived ‘here.’ This post could all just be a self-aggrandizing walk down memory lane, but I think there is something to be learned. I’ve arrived at my current role, where I specialize in marketing biotechnology and connecting scientists and technologies, often through web-savvy tools, with the help of many great mentors, colleagues, and software developers I didn’t necessarily know.

I also seized opportunities, even used my hobbies, to eventually arrive at a job that I absolutely love. Arriving at your destination involves determination and following the good luck path and ignoring the bad–I’ve had my share of that as well but try not to let it shape my destiny. So in the words of my ‘Twitter friend’ Sally Church, my advice to you is JFDI, or Just…Do it, continue to seek opportunities that will move you towards your goal, and you’ll get there. Give thanks to those who’ve helped you, you can never have too much good karma. Young scientists like Sean Seaver and Michelle Gill, whom I’ve met on Twitter, will likely find their niche more quickly than I did with today’s tools, and I suggest you follow their lead and take up blogging, microblogging or any tools which help you to learn more from others.

This post is dedicated to Warren DeLano, who made a big impact on the world of protein visualization by developing PyMol, one of the great open source software programs that I’ve relied upon on my journey. I thank him wholeheartedly.

2 thoughts on “Communicating Science, or How Did I Get Here from There?”